Live Event Sound, Lighting, Video, Broadcast, and Staging to fit your every need.

Conference Microphone Systems are an integrated network of microphones that are powered, organized and controlled by a CPU (Central Processing Unit).

These systems are excellent for most setting where several individuals need access to microphones in order to be heard by either an audience, or the other participants within the discussion group. Common uses are Board Meetings,  Q&A Panels, Review Groups 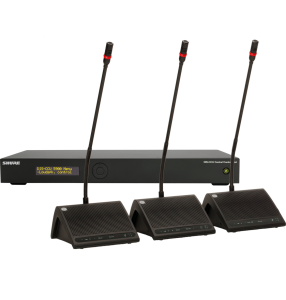 Additional common names for Conference Systems: (The Word “Systems” may sometimes be replaced with “Mics” or “Microphones” )

Designated “Chairman” Microphone(s) which has the ability to override the other microphones. This feature is useful when there are time constraints to be administered, the need to arbitrate, or simply to manage overly verbose participants.

A Central Processing Unit capable of managing a very large number of microphones (even hundreds) without the need need for a large mixing console, power outlets, and long cables from every microphone to a mixing console.  The System behaves similar to a computer network, with each microphone identified and Managed from within the CPU – typically as an automated function and requiring little or no human involvement except for very large complex installations.

Intercom Speakers as well as headphone jacks are located in the base of each microphone allowing each participant to hear what the other speakers are saying even without additional PA or audio systems. This is a very popular feature in large discussion forums such the United Nations.  Translators may also be inserted into the system for user selection.